Queer Lens welcomes guest contributions in English and/or Chinese from filmmakers, artists, curators, critics, and scholars on different aspects of the queer visual culture from around the world. We publish original essays, interviews, film reviews, exhibition reviews, and director’s and curator’s notes. For our first column article in 2021, it is our great pleasure to introduce the Inside/Out: LGBTQ+ Representation in Film and Television exhibition that took place at the Tsubouchi Memorial Theatre Museum, Waseda University, Japan, from 28 September, 2020 to 15 January 15, 2021. The curator Dr Yutaka Kubo writes about the exhibition.

Dr Yutaka Kubo joined the School of International Studies at Kanazawa University as an Associate Professor in film studies in October 2020. Specializing in the history of post-war Japanese cinema in particular, he takes queer approaches to re-constructing Japanese cinema. Exhibition Inside/Out: LGBTQ+ Representation in Film and Television is a result of the project he conducted at the Tsubouchi Memorial Theatre Museum, Waseda University, where he worked as an assistant professor, from April 2018 to September 2020, responsible for cataloging both 8mm/16mm films and non-film materials and for curating exhibitions such as In Memory of Film Actress Machiko Kyo (2019). He has also closely studied the representation of mourning in post-3.11 visual culture and has published an article “Still Grieving: Mobility and Absence in Post-3/11 Mourning Films” in Journal of Japanese and Korean Cinema (11:1). His recent interests include aging in popular culture, and a part of his project will appear in Japanese Visual Media: Politicizing the Screen (Routledge, 2021). He is currently working on his first book on Keisuke Kinoshita.

Tsubouchi Memorial Theatre Museum at Waseda University presents its 2020 Fall/Winter exhibition Inside/Out: LGBTQ+ Representation in Film and Television, ongoing from September 28, 2020, to January 15, 2021. This exhibition traces the histories of how sexual minorities and same-sex intimacy have been or have not been depicted in Japanese visual culture, focusing on cinema and television in particular, from 1945 to early 2020. Structured in six chapters, it displays production-related materials such as directors’ notes, advertisement- and publicity-related materials, still pictures, scripts, movie pamphlets/ flyers, film festival programs, film and gay magazines, and screenings of a few films such as Donald Richie’s Dead Youth (1967). In addition, it also aims to piece together memories from the past, which have been often invisible and overlooked in the discourses of Japanese film studies, by setting up the timeline to show chronological developments of Japanese cinema and television but also social events especially concerning sexual minorities. Ranging from commercial films, pink films, experimental films, independent films, film festivals, and to television dramas, a total of more than 300 materials is strategically displayed throughout six chapters separated into two sections, (1) from 1945 to the 1990s and (2) from the 2000s to the early 2000s.

Inside/Out: LGBTQ+ Representation in Film and Television welcomes visitors with visual excitement that already begins from the hallway. As an homage to a queer film classic The Wizard of Oz (1939), the hallway has been transformed into a yellow brick road. At the center of the hallway sits the title board of this exhibition to which anyone can leave a Post-It comment. This exhibition highly values communication not only between visitors and the content, but also among visitors. This attempt has been fairly successful, and there are more than 250 Post-Its comments. Luckily, the title board has also become a significant part of the exhibition where visitors form dialogues with each other. Also, the staff changed light bulbs with rainbow color light bulbs just for the sake of fun, and it has turned out that many visitors like this cheap attempt of queering the museum visually.

Chapter 1, “Re-Reading Post-War Japanese Cinema,” demonstrates the pleasure of reading against the grain. Two of the first examples are Keisuke Kinoshita and Yasujiro Ozu, some of whose works have been subject to queer reading by scholars such as Robin Wood, Yuka Kanno, and Yutaka Kubo. This chapter also introduces how films such as Hanagasa Wakashu (Kiyoshi Saeki, 1958) and An Actor’s Revenge (Yukinojo henge, Kon Ishikawa, 1963) use cross-dressing as visual spectacle and how some of the ninkyo and yakuza films have garnered homoerotic interests. Furthermore, it exhibits production-related materials for Banka (Heinosuke Gosho, 1957) and Manji (Yasuzo Masumura, 1964) in attempt to shed light on the importance of bungei eiga from the 1950s to the 1960s as a platform for depicting lesbian desires on screen. Lastly, Chapter 1 concludes with an insight into film censorship on homosexuality in the post-war Japanese film industry.

While there is an urgent necessity to reflect the past of sexual exploitation by pink films, we must also examine the historical and social significance of pink films in depicting sexual minorities. It is because overlooking their existence and significance explicitly suggests a possibility of burying the presence of individuals unvoiced within the communities of minority in the dark. As the exhibition whose purpose is to queer our museum located on the main campus of the university, showing the results of research conducted by film scholars on pink films is indispensable. Although the university’s Office for Promotion and Equality and Diversity has denied to sponsor the exhibition because of this content on pink films, we are proud to say that not only the exhibition but also the museum has fulfilled the role as an educational institution to excavate the histories often untold by the discourses of diversity projects on creating positive images of minorities. In fact, a large number of visitors have responded affirmatively to Chapter 2 and encouraged us to continue the further research.

Chapter 3, “1980~1990s: AIDS Panic and Before/ Beyond ‘Gay Boom’,” features two new talents discovered by Pia Film Festival in the 1980s, Shiori Kazama and Ryosuke Hashiguchi. Early works by Kazama depicted strong intimacy between girls, and, in the 1990s, she moved onto making films with gay characters as protagonists such as Fuyu no Kappa (1995). One of Kazama’s most well-known work remains The Mars Cannon (2001), a lesbian love story in which Kazama portrays how hard it is to continuously love someone and therefore how fragile love is. Hashiguchi seems to distance away from being forced to fulfill the role as one of the few openly gay filmmakers to only tell same-sex love stories. Rather, he cares more about distress, discomfort, and impossibility that one feels when falling into love with someone regardless of their sexual orientation, and he finds hope in them at the same time as illustrated in his 2001 film Hush!. Difficulty and impossibility of living as sexual minorities often told in the 1980s~1990s films often reflect the context of AIDS panic in the 1980s. Chapter 3 also touches upon this issue by introducing Hirokazu Kore-eda’s TV documentary August without Him (1994), featuring Yutaka Hirata.

What was the distance between the representations of non-normative gender and sexuality depicted in Japanese independent films from the 1980s to the 1990s and those depicted in other countries? Chapter 4, “Arrival of New Queer Cinema & the Emergence of Film Festivals,” gives a glimpse into the landscape of queer visual culture in the late 20th century Tokyo. It was Ikuko Ishihara, one of the film critics who paved the way for queer film criticism in Japan, who measured this distance by writing about queer films produced in Japan and imported from other countries. Displaying film pamphlets and festival programs, Chapter 4 introduces the cultural and economic context in the 1980s~1990s Japan that made possible the screenings of new queer cinema and the emergence of queer/LGBT film festivals.

As visitors walk under a rainbow flag and a transgender flag to enter Exhibition Room 2, Chap Chapter 5 “LGBTQ+ in Japanese Visual Media in the 21st Century” begins. How has Japanese visual culture portrayed lived experiences of sexual minorities and same-sex intimacy? Chapter 4 pays particular attention to the representation of trans women, film adaptations of Boys Love manga, independent films focusing on women, and issues of disability. As part of the exhibition, Mika Imai, the director of Until Rainbow Dawn (2018), appeared at the film screening event and shared her experience of filmmaking for deaf and queer communities. Furthermore, Chapter 4 also introduces some of the popular television dramas centering lesbian, gay, and trans characters as protagonists. The number of television dramas with LGBTQ+ characters increased especially in the late 2010s. The exhibition recognizes the significance of television as a platform for bringing new ideas to the public at low cost, while it is also important to emphasize that people involved in the television industry therefore must acquire proper knowledge and information regarding issues concerning lived experiences of sexual minorities.

Chapter 6, “Queer Youth and Queer Elderly: Why Does Aging Matter?,” asks visitors to consider how aging matters as one faces the pressure of fulfilling an ideal life course laid out by the heteronormative society. Ever since 2007 when Japan became a super-aging society, Japanese films and television dramas have offered a number of insights into experiences of aging. While recent social movements on LGBTQ+ rights include discourses of anxiety, care, and aging in old age, we hardly ever see the representation of queer elders with some exceptions such as Tsuyoshi Shoji’s Old Narcissus (2017) and Tomokazu Takeda’s Watashi no Ibasho (2018). Experiences of youth are of course necessary on screen and television, but how could queer youths be able to imagine what their lives would be if the scarce representation of queer elders in media continued? Aging matters to anyone regardless of their gender and/or sexuality in the 21st century; therefore the exhibition ends with this topic in hope that visitors start thinking about this issue as their own.

As a film scholar, and as a gay man, it has been stressful days for me to both prepare for the exhibition and observe how visitors respond to it, to tell the truth. What this exhibition offers is a merely one possibility of visualizing how Japanese visual culture since the end of the World War II has or has not represented the lived experiences of people often marginalized in the heteronormative, patriotic society. However, such a path woven by Tsubouchi Memorial Theatre Museum as an educational institution at a prestigious private university comes with a sense of power, authority, and representativeness. A possibility that this exhibition may hurt some people who have been rejected by such power, authority, and representativeness has haunted me for many months.

While I still have that thought and recognize the importance to keep questioning the path this exhibition offers, when I read each Post-It comment left on the title board, it makes me warm and my eyes water. The title board has successfully become a community in which people share what they have learned from the exhibition and improvements that the exhibition could make; what is more heartwarming is that it has become a space to talk about their lived experiences but also to encourage each other to survive. There are voices sharing joyful memories in the 1980s and 1990s as queer film culture started to bloom. There are voices of people involved in filmmaking and acting that promise more queer works that make people happy. And more than anything else, there are voices that have saved me from the fear that this exhibition may hurt someone. Having courage to share that they are part of LGBTQ+ communities, those voices belong to teenagers who have found hopes in their lives and futures as they walked through the exhibition. Although there are still more memories and more voices from the past that we must excavate and listen to carefully, it makes me happy to think that Inside/Out: LGBTQ+ Representation in Film and Television has succeeded in offering an opportunity, however small it may be, for young visitors to look back on the paths that older generations have taken and look forward to the futures that new generations are about to create. 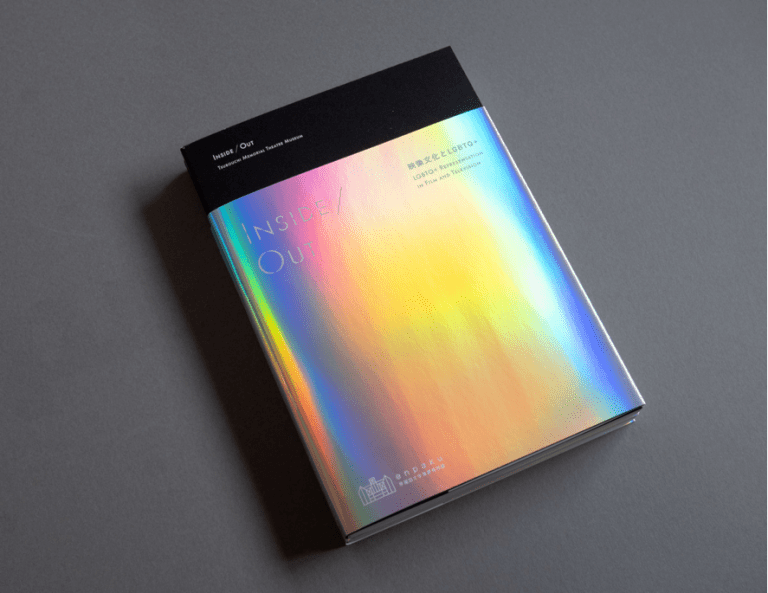