This was the first project event, co-funded by the Research Centre for Film at Newcastle University. This campus-based event invited two pioneering Chinese independent filmmakers, Wu Wenguang and Zhang Mengqi, to Newcastle for the first time to present their latest films and project to UK audiences. Wu Wenguang is a leading figure in Chinese documentary filmmaking and co-founder of the Caochangdi Workstation (CCD), an independent art space in Beijing, which has produced a large number of collaborative documentary-theatre-oral history proje cts. He launched the “Folk Memory Project”, a multidisciplinary memory initiative, in 2010, which focuses on memories of the Great Famine (1959-1961) in the Chinese countryside.  Zhang Mengqi, a new rising star in Chinese documentary filmmaking, has been a resident filmmaker as well as a choreographer at the CCD since 2009 and completed eight feature-length documentaries for the “Folk Memory Project” to date. 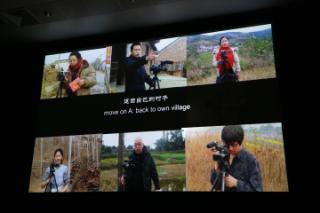 The event took place on 24th of May at the Culture Lab at Newcastle University. It started with the screening of Self-portrait: Sphinx in 47km (Zhang Mengqi, 2017). This is the eighth documentary in her “Self-portrait series”, which was filmed at her father’s village, 47km from Suizhou in Hubei province. The film explores the legacy of China’s past socialist movements and the impact of drastic social transformations on the rural village by juxtaposing an elderly woman telling the harrowing story of her deceased son with a 14-year old girl painting the landscape of the village and talking about her bright future. The contrasting perspectives of the two generations of women and the absence of a middle generation in the bleak village provide a starting point for discussion and reflection on the changes in China over the past 70 years.

It was a great honour to host the world premiere of Wu Wenguang’s latest work Autobiography: Struggle (2019) in Newcastle. This is the second documentary in his “Autobiography series”. It unfolds his struggle about his birth, coming of age, artistic career, and important turning points of his life. The film adopts the forms of “essay” and “self-portrait” to represent the process of Wu’s self-exploration and reflection over the past few decades of his life. Wu has always pushed the aesthetic boundaries of documentary filmmaking. This film is emblematic of his creative and pioneering artistic expression.

After the screenings of their latest work, Zhang and Wu delivered a lecture-performance about their “Folk Memory Project”. This hybrid media performance, which combines theatre, documentary and oral history, showed how the project had involved and encouraged over 200 youths to regularly go back to their villages to collect folk memory of the Great Famine and produced 56 films to date. Zhang performed on the stage responding to the content on the screen. Her body movements echoed the interviewees’ actions and accounts of the appalling conditions under the Great Famine. The performative elements highlighted the interactions between the 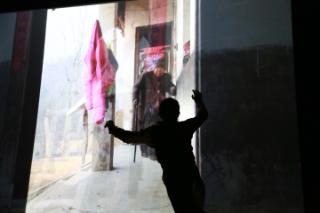 The performance received a big round of applause and was followed by a workshop in which a number of scholars and local filmmakers talked about their feelings and thoughts regarding the films and project. The discussants included Professor Guy Austin, Dr Paula Blair, Dan Elliott, Dr Dunjia Fehimovic, Dr Joseph Lauson, Dr Ian McDonald, Dr Luke Robinson, Dr Raisa Sidenova, and Dr Sabrina Yu. Dr Yu, as coordinator, gave a short introduction to the “Folk Memory Project” and emphasized the rich layers of their work, which combines oral history, documentary and performance. She got to know their filmmaking process through the mailing group of the CCD in which resident artists write about their filmmaking and interviews, exchange ideas and give advice to each other. It is the collective work and documentation of the filmmaking process in a written form that impressed her most. 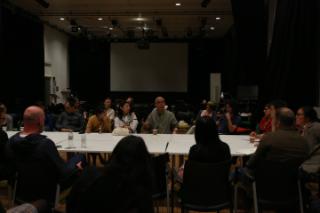 Both Dr Sidenova and Dr Fehimovic were deeply touched by the project and found parallels between the “Folk Memory Project” and film practices and documentaries which preserve memories about Stalin’s repressive regime in Russian and about marginalized villages during the civil war in Cuba. Dr Sidenova emphasized the fact that their work allows individual memory to be transmitted, and thus to take on a new social life and (re)shape national memory; this is typical of the introspective orientation of post-socialist film practice. Dr Blair found the use of sound in Zhang’s film quite fascinating and was interested in the interaction between the filmmaker and the children in her film.

The sustainability and continuity of the project was of interest to Mr Elliott, who is a filmmaker and has taught filmmaking to many Chinese students. He strives to help students develop ideas but feels that it is difficult for them to persist with their ideas and complete their films in China. He asked what  advice the directors could offer to his students. Professor Austin was amazed not only by the project’s sustainability but also by the memory transmission across generations. He was more concerned about how the directors preserve the memories/footage that they have collected. Both Dr Robinson and Dr Lawson highlighted the potential of visually recorded interviews to preserve memories as forms of testimony and historical evidence. Dr Robinson also stated that there is a consensus that the emergence of DV camera in China facilitates individual filmmaking. But the “Folk Memory Project”, he said, shows how collective work is created by using individual equipment (DV camera).  He believed the project creates dialogic engagement between past and present, between history and reality, and between individual and society. Both films were highly acclaimed by Dr McDonald for their exploration of the possibilities of visual expression. Dr McDonald expressed that the way that the films dealt with the past concerns how the past shapes the present and the future. He noted that he had never seen any films like Autobiography: Struggle before and believed his documentary module could have been more interesting if he had used the film for teaching. He was also moved by a scene in which a young man shouts into the ear of an elderly man who is almost deaf to ask what they ate during the Great Famine. He pointed out that the scene speaks of historical questions,  suggesting the difficulty of evoking memory, and this is where the power of documentary resides. Both filmmakers responded to their feedback and questions. The workshop drew to an end after an hour long stimulating discussion. 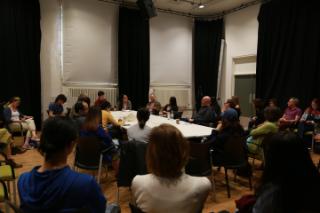 The event was well attended. In addition to scholars and filmmakers, a good number of undergraduate, masters and PhD students attended, shared their ideas and showed a keen interest in the project by asking in-depth questions. The event gave an insight into post-socialist film practice in China and brought up new ideas about dynamics of documentary, memory and history.