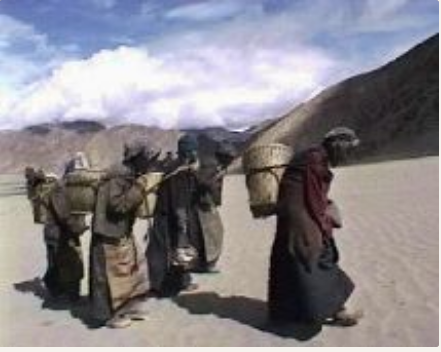 In Tibet, an old person will not be revered because he or she is enthusiastic about household duties, for people there believe that worldly affairs are for the young. The proper duty for the elders is to chant Mani (“om mani pedme hum”, the six-word impresa chanted by people believing in Lamaism to pray for enlightenment) to prepare for their death and fresh reincarnation.

The Mani Association is a time-honoured tradition in Tibet. Relieved of the burden of daily work, the elders gather to chant Mani, purifying their sins and praying for the serenity and ease of their forthcoming death and new reincarnation.

In the mid-1980s, a dozen old people in Old Latse Village in Shigatse, Tibet, voluntarily organized the reconstruction of the Gyang Temple, which was destroyed in the Cultural Revolution. With the assistance of villagers, the reconstruction took 10 years. When I met them in 1995, they had admitted new members and founded a Mani Association. These old people chant Mani collectively for three days every month. In addition, following the ancient practice in the village, they pray for the safety of the villagers by piously worshiping the gods and making offerings to ghosts. But their ultimate purpose is to support any member to complete their final life journey by organising a vigil and attending his or her funeral.

I was captivated by their extraordinary vitality. They were sick and feeble, often facing the threat of death. Yet they did not suffer from the loneliness and depression common to old people; rather, they felt more responsible for life than the young and had a deeper reflection on it. They were devoted to life and afraid of death, but death did not overwhelm them. This was because death to them did not mean the end of life’s journey, but the start of another, even more colourful new life. I not only felt the power of belief in them, but also the infinite courage and wisdom of man himself in the face of the vicissitudes of life and death.