The documentary is about a group of migrant workers in Shanghai, and the camera focuses upon a group living in the work shed in a university, who come from rural areas across China. The documentary mainly focuses on the life of two groups of migrant workers. One group is mainly middle-aged migrant workers, who simply come and work to support their families. They live a rather monotonous life in their off-work hours: walking in the university hall and watching a performance by the university students would totally make their day. But as simple as this dream seems, it is almost beyond their reach, since they are often rejected by the student guards due to their identity and appearance. They cannot help but angrily questions these well-educated people, “do you know it is us who built this hall?” This line often shuts these people up. 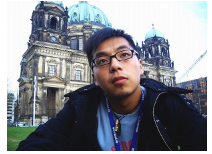 Born in Nantong, Jiangsu Province, and now lives in Shanghai. He entered the College of Communication and Arts, Tongji University in 2003 and is now a graduate student there.

Shanghai Farmer is my first documentary. We read all kinds of reports, both positive and negative, about the migrant workers from the media. They are a vulnerable yet fundamental group with Chinese communist characteristics, and I’m deeply attracted to their daily life. I chose to focus on their daily life after work is because it’s easier for us to imagine what it’s like when they work, but we hardly have any chance to learn about their life after a hard day's work. From the moment I started approaching them, I realized how little I knew about them. Although they never had a chance to received higher education, their understanding of, and attitudes towards, life are much more mature than us. It is due to our carelessness that their lives in their free time seem so boring. Quite often, they have to find ways to entertain themselves. The hardship in their lives is beyond what we can imagine, but they hardly even complain about it. Their optimism and strength is something that many of us lack. During the filming of Shanghai Farmer, I was often moved by their humility and frankness. I was not making a documentary about them; rather, I was learning from them about their attitude towards life. The only thing they ask for is getting paid on time so that they can provide for their families, and they live to make their loved ones happy every day. Their dream life is so simple, yet so practical. Some people feel that they have a really depressing life, and that’s because they desire too much. With fewer material desires and a more relaxed attitude, maybe you could have a totally different life!