China's rapid modernization literally traps the village of San Yuan Li within the surrounding skyscrapers of Guangzhou, a city of 12 million people. The villagers move to a different rhythm, thriving on subsistence farming and traditional crafts. They resourcefully reinvent their traditional lifestyle by tending rice paddies on empty city lots and raising chickens on makeshift rooftop coops. 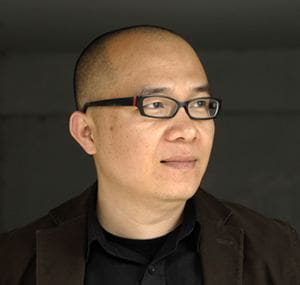 Ou Ning’s cultural practices are multidisciplinary. As an activist, he founded U-thèque, the independent film and video collective, and Bishan Commune, the intellectual community dedicated to rural reconstruction in China. As a graphic designer and editor he is known for his book, New Sound of Beijing. His curatorial projects include the festival Get It Louder (2005, 2007, and 2010), and the sound project “Awakening Battersea” in the China Power Station exhibitions co-organized by the Serpentine Gallery and AstrupFearnley Museum of Modern Art. As an artist he is known for San Yuan Li (2003), commissioned for the 50th Venice Biennale, and Meishi Street (2006), commissioned by the Kulturstiftung des Bundes.