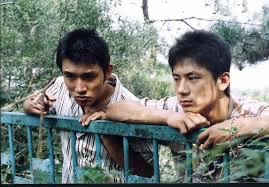 Refrain is the second film in my Defiled Conduct Trilogy. It’s my favourite work to date. The cinematic language employed in this film is simple. There are only 11 takes and two actors in this 109-minute-long feature. It took in total only five afternoons and evenings to shoot the film. Yet I want this film to be layered with meaning. Refrain is a piece of social criticism. The two brothers in the film are abandoned by their parents and neglected by social welfare programmes. The younger brother strives to feed his disabled older brother and himself as a street singer. Leading a life at the very bottom of social hierarchy has made it impossible for him to care about safe sex. He is infected with HIV and can’t afford any medication. The only way out of this plight that he can think of is to terminate the life of both himself and his older brother. This plight is a true depiction of a lot of people living in China today. I myself have encountered a situation like this. I can totally identify myself with the younger brother’s feeling of being driven to suicide. Refrain is also about ethics and love. The only two characters in the film are the two brothers. They are imprisoned by the larger, outer world. In their extremely confined realm, the game-like sex between the two brothers is affectionate, but more importantly, it can be regarded as a mode of protest and subversion. When the younger brother dies, the older brother mimics a forensic photo-taking of the dead body. What this illustrates is that society has refused to take care of them, yet it has kept on surveilling them. Refrain is also about redemption. The younger brother doesn’t trust society, therefore he wants the older one to die with him. However, the older one has an unconditional faith in the sacred power of lily flowers and bread/ the Holy Communion. It may seem that he doesn’t save his brother from death, but he redeems himself by surviving. This is a story of mystery and sacredness.