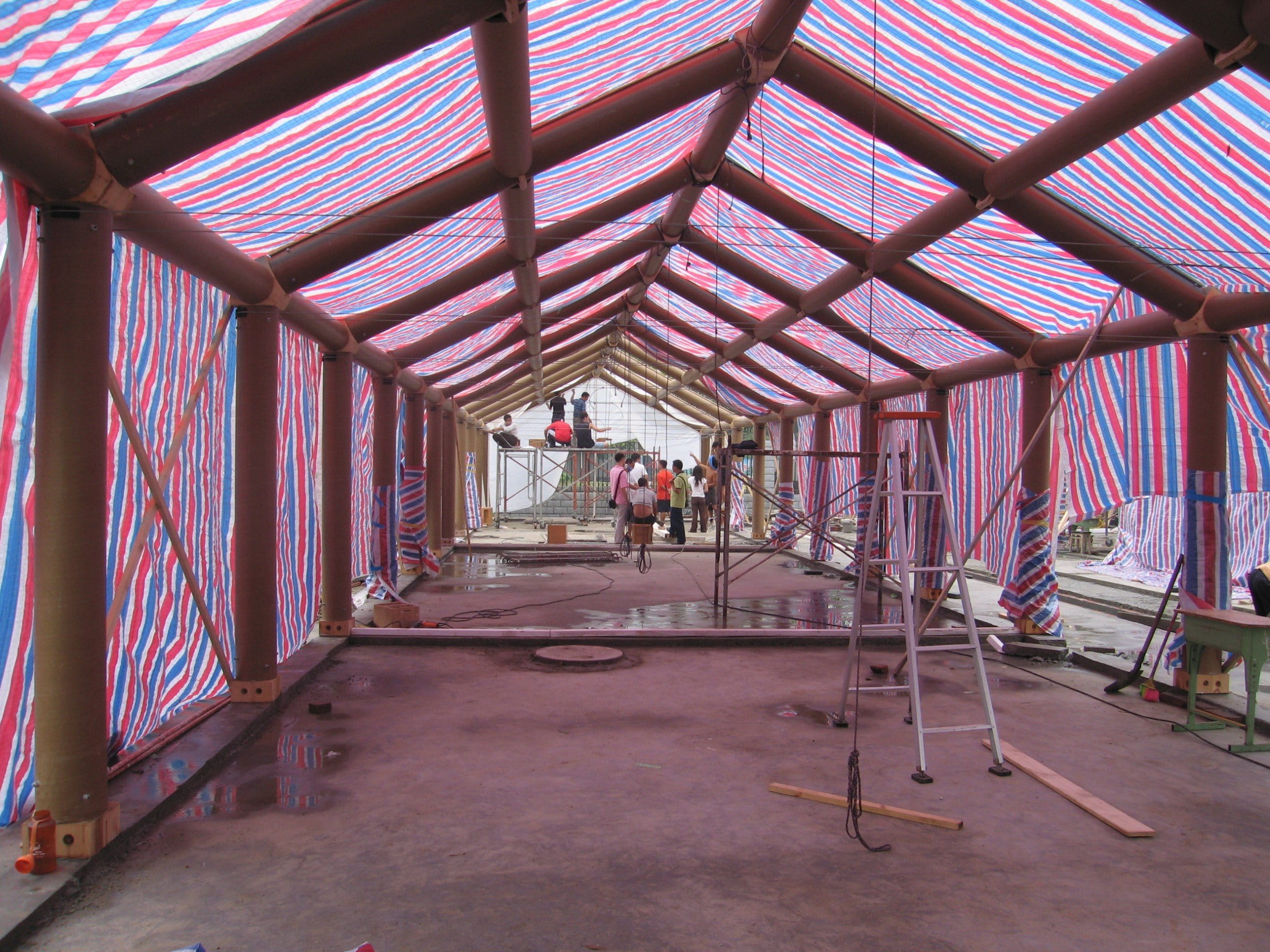 “From the beginning, I have always told my students, the main purpose of this project is not just setting up the houses. To me, it is more important is to build a bridge of friendship between Chinese and Japanese…” With this mindset, Japanese architect Shigeru Ban came to Chengdu in Sichuan Province. On May 12th 2008, the Wenchuan Earthquake hit. Two teaching buildings at the Hua Lin Primary School in Chengdu were destroyed. The paper-pipe structured houses designed by Shigeru Ban are a perfect fit for the needs of the primary school. Shigeru Ban is well-known for his bold use of materials, having set up safe havens for refugees all around the world. This time he is hopeful about his trip to Chengdu. But even with the best of intentions, a variety of adversities must be overcome. In August in Chengdu, the weather is too hot for the team to tolerate; more than twenty Japanese students have difficulties communicating with Chinese volunteers; bad memories of the Second World War linger in people’s minds; different working methods increase the gap between the two sides …But to accomplish their common goal, they have to conquer all adversity. Under the expectant eyes of the children, three paper houses are finally completed.

Zheng Xiao Female. Born in 1984 in Zigui, Hubei Province. Graduated from the Architectonics Research Centre at Peking University in 2009. July 2007 to June 2008, Director of Public Relations for Peking Palette Pictures Ltd,. Co. March 2008, selected by UCCA to attend “Independent Film Plan” training. Independent Producer of 512 Our Homeland, Image of Yu Xi, All Flesh, Mei, and ten other documentaries on Chinese living environments and architecture. Curator of the Global City Forum International Youth Film Exhibition 2008. Fan Popo is a queer filmmaker and activist. His films address topics such as same sex marriage (New Beijing, New Marriage), trans issues (Be A Woman), and feminism (The VaChina Monologues). His trilogy Chinese Closet, Mama Rainbow, Papa Rainbow, focusing on LGBT families in China, had had a strong impact on Chinese society. His tireless work on LGBT visibility also includes serving as organizer for the Beijing Queer Film Festival for more than a decade, as well as founding the Queer University Video Training Camp. In 2011, he received the Prism Award from the Hong Kong Lesbian and Gay Film Festival. In 2016 he won the best short film at Chouftouhonna, Tunis International Feminist Art Film Festival (The VaChina Monologues). He participated in Berlinale Talents 2017, and was jury of the Teddy Award in 2019.

We were attracted by the “Paper House” project as soon as we heard that it was about to begin. With our DV camera and our passion for documentary in tow, we came to Chengdu in search of this poetic architecture. The process was not as smooth as we had originally anticipated, but we had some unexpectedly fruitful experiences. After all of our collective hard work, this documentary was selected by CNEX to be included as a part of their annual topic-based productions. We felt very happy but pressured at the same time. It is another process – we have discovered that making a film is not unlike building a house.