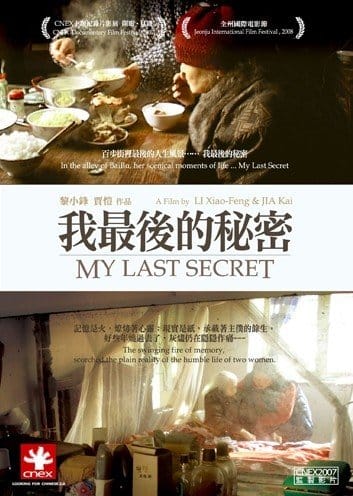 On an ancient Suzhou street with white walls and black tiles, an old lady in her nineties lives with her carer who is in her sixties. The lady comes from a famous family and was a national athletic star during her college years. After fleeing to Suzhou from Shanghai together with her lover, her life was filled with hardship. Her husband didn’t leave her, but always betrayed her, and in the end passed away before her. After her husband’s death, the old lady, who has no children, wrote a will that she will give all her money to the local university for a scholarship. The old lady intended her will to be secret. However, everybody knew about this secret. People couldn’t understand why she would give money to students who would never take care of her. While the lady was sick and confused, her carer made her write a slip to give the caretaker RMB 20,000. In order to get this money, the carer began to study and learn one Chinese character a day. The grandma was hospitalized several times and lots of valuable furniture was taken away by her niece, which made the carer envious. So, the carer and the niece began to bad-mouth each other to the old lady… Before we know it, six years have passed. Half of the old street has been dismantled while the other half remains. With all that is happening in the world, the old lady has lived through the frustrations in her life and has been revitalized at the age of 95, just like an ancient tree producing new leaves. Under the autumn sunlight and with the carer by her side, she caresses the remains of a photo showing her with lipstick on, misses her late husband, and ponders how her secret will one day be disclosed and what legacy she will leave — all things that are meaningless to those around her.

Li Xiaofeng Born in Pingxiang, Jiangxi Province, and now living in Shanghai, Li Xiaofeng is the author of Films in the Twentieth Century and Creation of Documentary Films. Films include The Striker of the Spring Gong, awarded Best Short Documentary at the 8th Beijing Film Festival of University Students, 2001); The Night Goer, selected for the 20th Fribourg International Film Festival and the 8th Taipei Film Festival, as well as many international film exhibitions); Leather Shoes or Straw Sandals, selected for the NHK International High Resolution Documentary Project in 2006; and A Street Of One Hundred Paces. Jia Kai Born in Suide, Sha’anxi Province, Jia Kai obtained his Master's degree from the Art Department of Beijing Normal University and now is a lecturer in the College of Communication and Art at Shanghai Tongji University. He is the translator of three books, including Robert J. Flaherty: A Biography, and has participated in the production of films such as The Night Goer, Leather Shoes or Straw Sandals, and A Street of One Hundred Paces. In addition, he has also produced many programs for CCTV, Beijing TV Station, and Shanghai TV Station.

In her final years, the old lady seemed to be slipping into miserable decline. But this elegant elder still shone till the last. Stinginess and generosity, bitterness and kindness, silliness and wisdom, all these things were unbelievably intermingled—what a deep and rich internal world this is! As filmmakers, we were sad and excited. During filming, my grandparents passed away in succession. Those shoes made by my grandmother were left in the attic of my home—wordlessly opening their mouths, making me feel very guilty and regretful that I’d been away throughout the year. Unconsciously, such an inexplicably complex feeling can also be found on this old street, among these people who will disappear soon. If it were possible, we would like to keep shooting this film forever, never bringing it to an end.