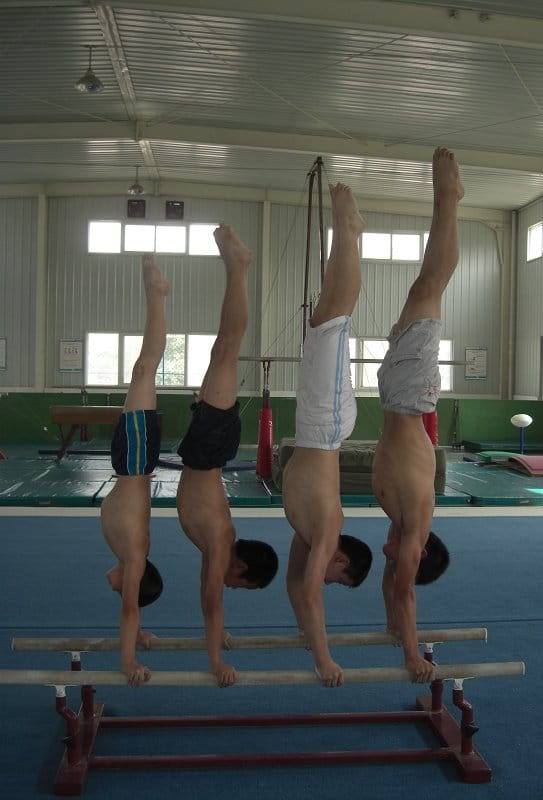 Everyone experience changes in life. Behind each change lie multiple opportunities. But the reality is even if one puts in all ones effort, what one gets in return isn’t necessarily the anticipated outcome. 33-year-old Xu Xuedong graduated from Xi’an Sports Academy in 1993. He is passionate about gymnastics and decided to give up more lucrative job offers in order to become a gymnastics teacher. With a limited budget the school is unable to hire more teachers, therefore Xu has to wear many hats: in the mornings he teaches gymnastics in the stadium they lease, in the afternoon he teaches chemistry in an ill-equipped classroom. At other times he must also look after the students’ daily needs. Everyone considers him a full-time teacher. The students dream of winning medals. So cultivating the best gymnasts in order to win medals has become Xu’s lifelong goal. By chance, Xu meets 26-year-old Xin Rui, a kindergarten teacher. With similar backgrounds, Xin Rui immediate understands and supports Xu’s work. The two fall in love. Suddenly Xu’s uninteresting life as a gym teacher is filled with the warmth and excitement that love brings. However, seeing the difficulties in their lives, including housing and their jobs, their families and friends disapprove of their union. But despite this, they believe the power of their love will bring them a happy and bright future. A year later, when they begin to talk about marriage, not only have they not resolved the housing problem, but new problems have emerged. The gym class is dissolved; Xu is left without a job. Fantastical dreams intertwine with the hardships of reality that sit heavy like a fog in front of them. How will they emerge from this thick fog, make the right decisions and face these changes?

Throughout college, I always wanted to make a documentary. A chance encounter introduced me to a gymnastics teacher and his students. I wanted to do a film about how this teacher and his students worked toward their goal of achieving medals. And how. through this experience, the teacher and students learned about life’s lessons. I remember my first meeting with Xu Xuedong. It was during the summer and he was still single. His love and passion for gymnastics were infectious. Standing topless in the gymnasium, he shouted moves to his students with energy and vitality. The students diligently listened to each command. Over time and through our interactions, his everyday life and love life also attracted me. How he survives is also representative of how many ordinary Chinese people live, including myself. After he fell in love with Xin Rui, I believed love can change someone. So, through the camera lens, I documented more of their love and intimacy. And without realizing, I shifted my focus from the students and his work as a gym teacher to their personal life. Around the time I was graduating, I followed Xu Xuedong back to his hometown of Ningxia to get more footage. The conversations between Xu and his father were mostly around buying a house and having a stable job. Even as an observer, I felt the pressures of everyday life. Convinced of the power of love, but ending a relationship because of harsh realities, Xu lamented that the disparity between his dreams and reality is too great, and that earning a living and live in a big city like Xi’an is too difficult. Suddenly, I remember the lyrics of a song by Chinese pop singer Zhao Chuan: “life with pressure or life with dignity, what’s more important?” Really, what is more important? I have been contemplating this question because, having graduated, I am now faced with the same dilemma. Mister C is my debut film about the true meaning. Coincidentally, during the shooting of this film I was transitioning from a school to society. Shooting this film has changed me as well. I am grateful to all my friends who helped during the production. Because of your help, I am more passionate about and dedicated to documentaries.