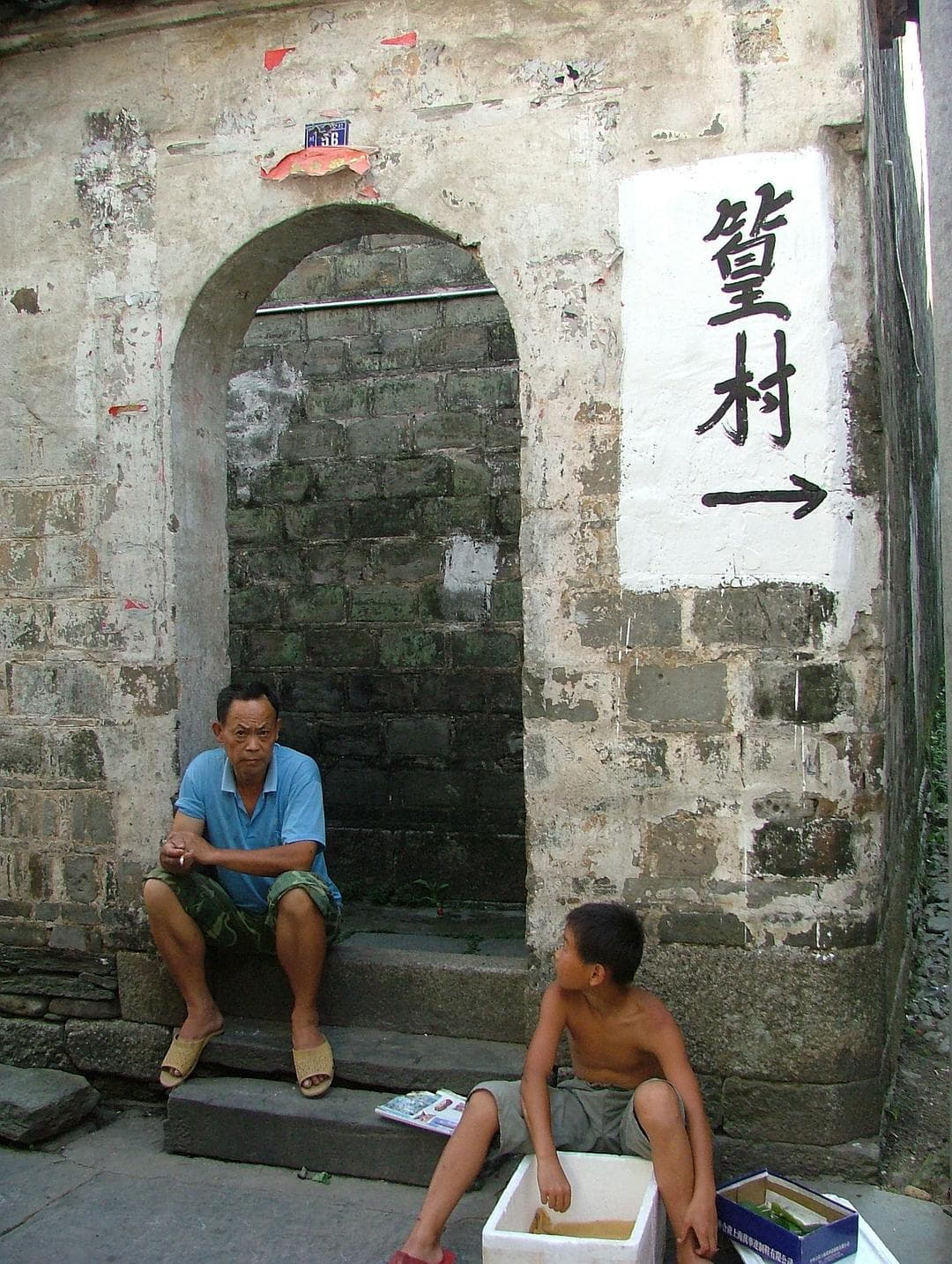 Huangcun is situated in the most beautiful county in China – Wuyuan. Though the village is a haven of peace and happiness, Huangcun is also rather isolated and lacks an organized tourism development plan. In contrast, its neighbouring village, Likeng, which is famous for a Confucian school, seems to attracts much more attention and noticeably more tourists and income from tourism. In fact, Huangcun has the same breath-taking landscape and the same elegant Huizhou-style architecture as Likeng. However, at the point when people in Likeng started doing guided tours and opening up restaurants in their village, young people from Huangcun had no choice but go and work in big cities, leaving behind the elderly and children. Huangcun was also famous for its tea once, but that no longer brings in much income with the constant decline in the price of tea in recent years. It is said that the forest in the mountains has been overexploited just so that people in Huangcun can subsist. Yu Duofu, from Huangcun, is more than 70 years old. He dreams about turning Huangcun into a historical site like Likeng, thereby improving the living conditions in the village, including renovating its heritage sites. So, he volunteered to be the head of the village's Tourism Development Committee. He heard that via the internet, more people could discover his village. However, after he inquired at the county tourism office, he discovered that a year’s advertisement would cost a fortune. Over the following months, Mr Yu ignored the weather and went around highways connected to his village with a paintbrush and some paint, writing on walls "to Huangcun →". In the long holidays that followed, flocks of tourists unexpectedly turned up in Huangcun because they saw the signposts. It's been two years since then. The signposts Yu painted are all weather beaten and some are even blocked by new buildings. One can just about make out the village’s vague attempt at tourism business via the wooden signboard at the entrance of the village, saying "Admission Fee: 20 yuan each". Huangcun is too isolated and the bumpy roads just make it even more difficult for large vehicles to access, let alone inviting enough for any professional tourism planner to invest in infrastructure. Yu Duofu can now only hope that one day some rich man would come and develop Huangcun the way someone invested in Likeng. He feels that only money can make things better. To get to Huangcun from the county station, you need to make a transfer in Qinghua. Qinghua is where Wu Dongqing lives. Wu is a teacher in a local middle school. He loves traveling and photography. He even single-handedly set up a website about traveling in Wuyuan and often answers questions from his friends online. After gaining some celebrity on the internet, Wu followed his friends’ suggestions and opened a hostel in his own house. He named his hostel "Post House" and aimed to make friends with local visitors and exchange travel experiences. Because of this, some tourists decided to stay at his hostel in Qinghua rather than other, better places. Compared with Likeng, Huangcun lacks location and financial resources; compared with Wu Dongqing, Yu Duofu lack education and communication skills. However, are they destined to lose?

Born in Shanghai, Guo is now pursuing his Masters degree in art at the College of Communication and Arts, Tongji University. He has made some short documentaries, including Mr Jiang and March 3rd.

I visited Huangcun two years ago and met Yu Duofu. Mr. Yu hoped to improve people's lives in his village by developing tourism. His actions and his perseverance were overwhelmingly touching. I felt his helplessness, but I felt his hope even more strongly. The process of pursuing one’s dream must be so powerful and so appealing that I knew right then that I wanted to film his story. Huangcun is an area forgotten by the tourism industry, and Yu Duofu, who is responsible for tourism on the village committee, hopes that one day Huangcun can become a village famous for a historical Confucian school, like Likeng. However, he slowly finds that this seemingly achievable dream is in fact very distant. Wu Dongqing from Qinghua is a middle-school teacher who transformed his home into a family hostel a few years ago. He likes surfing the internet and loves photography. He has made lots of friends across China and has even had visitors come to stay just because of him. Personally, I want the film to disclose a common feature in the development of tourism in the rural areas in China: villages that appear similar may receive totally different levels of development as a result of different levels of or intensity of promotion. Some remote villages might become well-known overnight, rendering the villagers wealthy, whereas most of those villages are unknown to the outside world, and the people there still live in hardship.