Fight of a Caged Beast 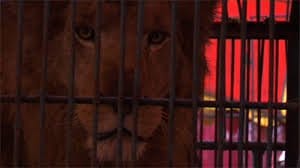 Seventy-year-old “Dayi Boss”, his son “Xiaoyi Boss”, and their grandson “Xiaoyi”, who dropped out of school, manage a mid-size circus. Relatives, neighbours and about 20 pickup workers all travel in three trucks carrying Siberian tigers, cougars, black bears, monkeys and goats touring cities throughout China, maintaining this ancestral business handed down through the generations. In addition to the three generations, there’s also a couple, a father, a daughter and her boyfriend. In the winter they go south, in the summer they go north, attracting audiences and fulfilling curiosity wherever they go. But people’s curiosity is easily satiated so they are only able to stay in any city from three days to a week before they need to leave again. They stop wherever they can, and no one knows where their next destination will be. However, once at the next destination, they still have to deal with local officials’ intense questioning and possible expulsion, as well as meet the exorbitant rental fees. They sleep on the hard metal seats and under the tents. They eat with the caged animals. Neither acrobats nor animal tamers have a secure job. After a short return home for a quick visit they must quickly continue with this backbreaking lifestyle, day after day. The declining economy, the dwindling audiences, the ever-changing cast members cause Dayi Boss and his crew to feel the road ahead to be profoundly uncertain. High hopes and anticipation from their hometowns make them feel powerless. Yongqiao District in Suzhou City, Anhui Province, is known as the “circus town.” Dayi Boss’s circus is but one of 240 touring circuses that perform throughout China’s vast land. The local government of this region is known for producing animal circuses and cultivating a “circus world” in order to bring in tourism. Local animal tamers train and care for hundreds of lion, tiger and bear cubs in the village and provide training to hundreds of circuses outside of town. Under the crack of the whip, the cubs learn how to perform and can soon begin their nomadic life. In ten years, once they mature, they are then traded into the zoo for show in order for younger cubs to take over the entertaining. They will travel with hundreds of circuses and traverse thousands of miles. Each day, the animals jump through fire hoops, hop over obstacles, walk tight ropes and then take refuge in a small cage. For ten years they entertain thousands of parents and children, creating a unique parent-child bonding moment. And for many children, their first interaction with animals is solidified through these experiences at the circus. Thousands of animals throughout China are prepared for this purpose, endlessly bred and domesticated for the sole purpose of performance, while countless children are entertained. This is a gain and a loss for regional economic prosperity; to allocate surplus labour; to enrich public entertainment; and to enlighten the young people of the country.

Began painting at age four, enrolled in art classes for eight years. At 17 created a logo for the renowned Reifuxiang silk store. At 18 interned for the Central Academy of Drama Performing Arts Centre. At 19 passed the written exam for the Performing Arts Centre but failed the audition. At 20 wrote many poems. At 21 created education software and a script selected for Beijing Television. At 22 was copy intern for Foote Cone & Belding, creative intern at Ogily & Mather. At 23 shot his first short film, and in order to learn storyboarding returned to Ogilvy & Mather. At 24 scripted for Euro RSCG Beijing, entered and won first place at the Golden Calf Award, graduated from college. At 25 assistant director on commercials, accepted into French Film Academy’s Directing Department, Beijing Branch. At 26 entered Beijing Film Academy Directing Program, participated in “Visioning Beijing” and became Giuseppe Tornatore’s assistant executive director. At 27 was director’s assistant to Ning Hao on Silver Medalist, scouted for Shao Hongli’s Dream of the Red Chamber. At 28 directed Hope In The Hand, a documentary about handicapped people. At 29 assistant director on End of the World, a music video, and second screenwriter for Tiger Girl, while Fight of a Caged Beast was entered and accepted into CNEX 2010’s Chances and Opportunities program. At 30 wrote and was assistant director on Step Away, a Tian Meng film. At 31 directed, shot and edited Sincerity, a documentary on the making of Qian Xuesen.

It is a bright darkness…the lives of the circus allow me to see that humans and animals are shackled by a similar fate, tolerating the same cruel environment, walking on the same unpredictable path. Animals entertaining humans in exchange for their lives, while humans develop a reticence around the struggling animals. And yet, the guilt over this passivity stems from allowing for both humans and animals to be devalued and faced with a difficult and fleeting life.