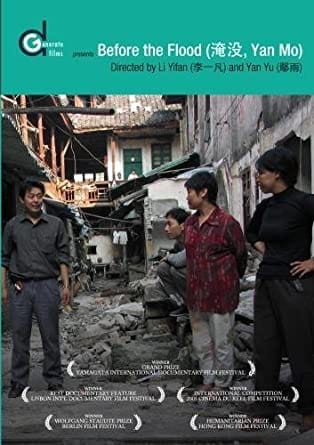 When the Three Gorges Dam was completed in 2009, it was the world’s largest. Its reservoir also submerged villages and displaced thousands of residents. Made famous by the verses of the poet Li Bai, Fengjie, in Chongqing, was one of those villages. Since January 2002, when the dam’s waters began to rise, the lives of the village’s inhabitants have revolved around the question of migration. As this spectacle begins, so the strengths and weaknesses of the villagers rise to the surface, for they are gripped by anxiety about the future. A film which poignantly captures an era in transition.

Li Yifan
Born 1966 in Chongqing, China, Li Yifan graduated from the Central Academy of Drama in Beijing in 1991, and afterwards worked as a director for TV commercials in Guangzhou. In 1996 he returned to his hometown and worked as a writer. Between 2000 and 2001 he worked as the chief editor of the newspaper Yu Zhou Fuwu Bao.

Yan Yu
Born 1971 in Chongqing, China, Yan Yu launched his career as a photojournalist at Chongqing TV Station where he worked between 1994 and 1998. Later, he moved to Beijing to become a private photographer for documentaries, series dramas, and advertisements.