In this short article, I offer a brief overview of the status quo of the Chinese queer documentaries in a transnational context. In doing so, I hope to highlight the historical, social, and cultural contexts of their production and circulation, as well as the aesthetics and politics they represent.

I am currently researching on Chinese queer documentaries. This research topic may seem clearly defined but it is far from clear. What is Chinese, and does this category include the Sinophone sphere and the Chinese diaspora? What is queer, and is this another term for LGBTQ+? What are documentaries, and do they include docudramas, documentary theatres and online shorts (e.g. wei dianying)? Although I have usefully defined my object of study as ‘LGBTQ-themed documentaries produced by and for LGBTQ communities in the PRC.’ This does not make it an easy topic to study. After all, there is a limited number of LGBTQ-themed documentaries produced and circulated inside the PRC because of China’s long-standing media censorship; a lot of these films are circulated overseas, or internationally, online and at international film festivals. To talk about Chinese queer documentaries therefore must address the international context.

But this does not mean that there are no queer documentaries inside the PRC. There are at least three types of queer documentaries inside the PRC: (1) documentaries about queer life made by queer-friendly mainstream, commercial, independent and social media to inform their audiences and to express their humanitarian concerns; (2) DIY (do-it-yourself) type of short films made by LGBTQ-identified individuals for self-expression and to share with friends and family, often circulated online and on social media; (3) queer community documentaries produced by LGBTQ-identified filmmakers and activists, circulated through community screenings and film festivals.

In recent years, with the intensification of media censorship in China, LGBTQ identities have become increasingly invisible in China’s official and mainstream media. At the same time, there is an increasing queer visibility in commercial, independent, and social media. This can result both from media producers’ humanitarian concerns and queer-friendly gestures, and from ‘queerbaiting’ – i.e. media trying to gain a queer audience and possibly make a profit from the burgeoning ‘pink economy’. The increasing number of nominations for the annual China Rainbow Media Awards testifies to the widening queer coverage in commercial, independent, and social media. Most of these films or videos are made by non-LGBTQ identified filmmakers. Despite their good intentions, these films can appear voyeuristic and even objectifying to the queer lives they document.

A significant trend in recent years has been the proliferation of DIY (do-it-yourself) type of short films made by LGBTQ-identified individuals to express themselves or to share with their friends, often circulated online and on social media. With the widespread use of digital video cameras and mobile phones, along with the increasing popularity of video streaming websites, more and more young people have taken up digital video cameras and smart phones to document their own lives and the lives they are familiar with. The short films and videos they make usually feature coming out stories, romance, identity, and relationship. These personal stories – melodramatic as they sometimes are ­– embody affective powers and transformative potentials.

My current research focuses on the third type – the queer community documentaries produced by self-identified queer filmmakers and activists, circulated through community screenings and a limited number of queer film festivals. The 2000s and early 2010s witnessed a rapid development of LGBTQ identities and communities in urban China; this period also saw the proliferation of queer community documentaries. Documentaries proved to be an important form of film for queer community engagement and social activism. There emerged queer filmmakers such as Cui Zi’en, Fan Popo, He Xiaopei, Shi Tou, Wei Xiaogang, and others – a film collective which I call ‘the queer generation’ (Bao, 2019) – who were involved in the organisation of the Beijing Queer Film Festival and the China Queer Film Festival Tour. These films usually feature identity and community issues, represented by Fan Popo’s ‘rainbow family trilogy’ (Chinese Closet, Mama Rainbow, and Papa Rainbow) 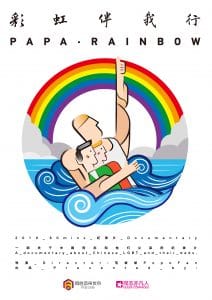 and many videos made by Queer Comrades and CINEMQ.  These films are characterised by a strong awareness of identity and community. The screening of these films in community spaces and queer film festivals (which are very few but they do exist) constitute an important form of queer activism – queer ‘cultural activism’ that I discuss in Queer China (Bao 2020).

Chinese queer documentaries must be situated in a transnational context. This is because of the transnational nature of Chineseness, queer identities and communities, as well as film cultures. Many Chinese queer filmmakers are now working transnationally ­– partly a reflection of the deteriorating environment for queer filmmakers inside China – and many international filmmakers are working in China documenting queer lives in China. Fan Popo is an example of the former and Matthew Baren, director of Extravaganza (2018), is an example of the latter. International queer film festivals and other cultural events have provided platforms for these films to be disseminated and received. Notably, the production of Chinese queer documentaries has become increasingly transnational – from funding to the production team. Chinese queer documentaries therefore take on an international aesthetics, challenging both an essentialised notion of Chineseness and queerness.