The Beijing Independent Film Festival Newcastle tour is a collaboration between the Li Xianting Film Fund and Newcastle University, sponsored by the Research Centre for Film and Digital Media. It aims to introduce the best and most recent Chinese independent films to UK audience, and contribute to a diversified and vibrant film culture locally and nationally. 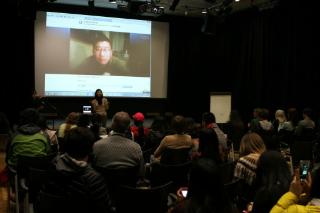 BIFF is one of the most influential independent film festivals in China and this is the first time it came to the UK. Four award-winning documentary films shown in this tour, Shattered (Xu Tong 2011), The Cold Winter (Zheng Kuo 2011), The Next Life (Fan Jian 2011) and Beijing Besieged by Waste (Wang Jiuliang 2011), made by leading Chinese independent directors, offer a realistic portrayal of contemporary Chinese society. Three films were UK premieres.

130 people registered for the event. Gathering from registration forms, people registered include students, staff, and general public, and 30% of them are non-Newcastle based. The event was well attended; one afternoon screening had around 90 audiences and the quietest one (the first one in the morning) also had 45 audiences. Dr Luke Robinson, a Chinese film specialist from Nottingham University, gave an excellent introduction to independent filmmaking in China. The climax of the day was 45 minutes post-screening Q&A with director Zheng Kuo via Skype. Audiences asked so many questions that the session went beyond its planned time. The director engaged with questions brilliantly, with the help of the interpreter Gillian Hu.

The following is some selected audience feedback.

“Congratulations on what was an absolutely EXCELLENT festival last week. I enjoyed it a lot!” – David Green, PhD student in media

“I thoroughly enjoyed the Beijing Independent Film Festival (BIFF) and think it was enormously successful in giving both the British public and many Chinese students the opportunity to see Chinese documentary films that they would otherwise be unable to watch or simply unaware of. I felt that the films chosen for the festival covered a variety of issues that are very relevant to contemporary China and I was pleased that, although political issues were raised by all the films, Chinese politics was not an overriding theme for the event. Too often representations of China at international events focus on the political situation, whereas the BIFF event offered insight into a range of issues that are relevant in the daily lives of Chinese people, both political and other. The event was well organised and I was particularly impressed with the interview via Skype with Zheng Kuo, director of ‘Cold Winter’…The ability to speak with the director gave a greater sense of realism to the film, as it changed from simply a Chinese film screened in Newcastle, to a film made by a real man, about real people and events that had profoundly affected their lives. Overall I was very impressed with the event and hope that the BIFF will return next year.” — James Cummings, MLitt student in SML